Please join or renew at www.historicmountpleasant.org/membership or

HMP is a 501(c)(3) organization & membership dues & other contributions are fully tax-deductible.

Click here to learn about HMP’s efforts in support of preserving this historic building.

The Renaissance Condominium Association and the Kenesaw-Phoenix Cooperative, Inc. asked for a permit to demolish 25 original balconies from the historic apartment building located at 3060 16th Street, NW, known commonly as the “Kenesaw.” They contended that a failure to issue the permit would constitute an unreasonable economic hardship for them under the Historic Landmark and Historic District Protection Act of 1978, D.C. Code § 6-1101, et seq. (“Act”) and that approval of the demolition would be consistent with the purposes of the Act.  The Mayor’s Agent denied the permit.

The Mount Pleasant neighborhood that we know today began as a post-Civil War subdivision of one of the large nineteenth century estates in the area. In 1850, William Selden, Treasurer of the United States, acquired 73 acres north of Peirce Mill Road (now Park Road) and built a large house overlooking Piney Branch Road (now 17th Street). A Southern sympathizer, he returned to his native Virginia when war broke out and in 1862 sold the property to Samuel P. Brown. The Union Army occupied the property during the Civil War and used the house as a hospital. When the war ended in 1865, Brown moved his family into the house and subdivided the property east of Piney Branch. He named his property and his subdivision Mount Pleasant. The subdivision extended east to 14th Street and encouraged the development of a commercial area around 14th and Park. The area became known as Mount Pleasant Village. 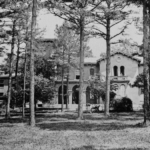 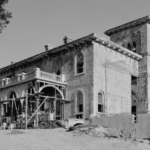 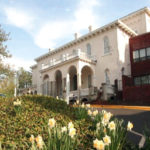 In 1889, Brown’s son Chapin acquired the north part of the Ingleside Estate from the heirs of Hiram Walbridge, a Congressman from New York who had died in 1870. The Ingleside Estate was situated to the west of the old Selden property but extended all the way down the hill to what is today Harvard Street. Brown purchased the land north of Park Road, including the (the main building for Stoddard Baptist Nursing Home). Built in 1851, this is the oldest building in Mount Pleasant. The house was designed by Thomas Ustick Walter, architect of the dome and wings of the U.S. Capitol, and originally faced south, giving it an expansive view not only of much of the estate but also of the City of Washington beyond. After Chapin Brown subdivided the land, the house faced an alley. A subsequent owner moved the entrance to Newton Street.

The orientation of the emerging neighborhood changed with the extension of Sixteenth Street and arrival of the streetcar at Lamont Park in 1903. (Photo of the early Streetcars can be found in Mara Cherkasky’s book at page 43, see the link below.  And see a glimpse of the Mount Pleasant Loop at 13:35 in this youtube video) 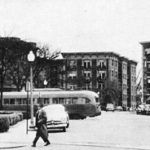 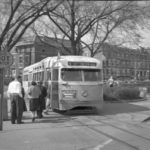 The Walbridge heirs, taking advantage of the new market opportunities, subdivided the rest of their land south of Park Road, and developers quickly moved to fill the area with row houses. The new traffic patterns encouraged the development of a separate commercial corridor along what became Mount Pleasant Street. Much of this land had been owned by James Eslin, an innkeeper who died in 1884. While the Eslin Estate had been subdivided and a few houses built on the property before this time, it was not until after 1903 that development of the area began in earnest. Apartment buildings came first, starting with 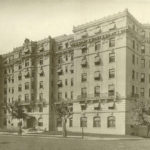 The Kenesaw in 1905, then row houses and stores. The first stores were built directly across the street from the streetcar terminus at Lamont Park.

As the community grew, the Mount Pleasant name became associated with this new area west of Sixteenth Street. Much of the neighborhood was built before the First World War, but building continued well into the 1940’s. The “period of significance” for the historic district – 1850-1949 – reflects this fact. While the racial and ethnic composition of the neighborhood has shifted over time, it has long been characterized by diversity, a quality that its current residents seek to protect.

For more information on the history of Mount Pleasant, you may consult the historic district applications  as well as the pamphlet published by the DC Historic Preservation Office (Pamphlet).

We encourage you to experience this history directly by following the Mount Pleasant Heritage Trail and visiting the callboxes with sculptures of historical events. (See maps below.) HMP was a neighborhood partner for both of these projects that were sponsored by DC Cultural Tourism. Michael Ross, an artist now based in San Francisco, was a resident of Mount Pleasant when he designed and executed the callbox sculptures in 2003 and 2004. Mara Cherkasky (also a former resident) served as historian for the Heritage Trail, which was completed in 2006 and led to the publication of her book on Mount Pleasant in 2007. 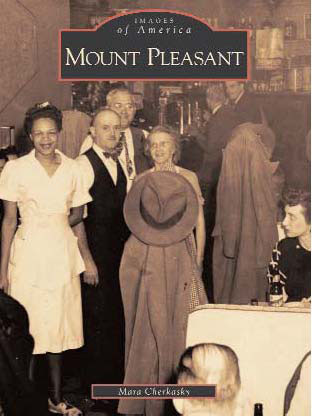 There is also a chapter on Mount Pleasant in Washington at Home: An Illustrated History of Neighborhoods in the Nation’s Capital, edited by Kathryn Schneider Smith. 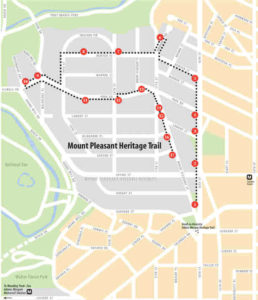 Discover a neighborhood celebrated for its cultural diversity and charming streets when you follow Village in the City: Mount Pleasant Heritage Trail. The trail’s 17 poster-sized street signs combine storytelling with historic photographs and maps.

Walk the trail at your own pace, sampling neighborhood character, businesses, and restaurants as you go. Pick up a free trail guide from merchants along the way. Or, Download the Mount Pleasant Guide or MTP Guide Spanish. 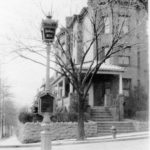 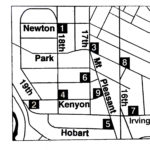